There are many types of websites established to support online connections. Each site generates both challenges and opportunities depending on their nature and the way in which they are utilised. 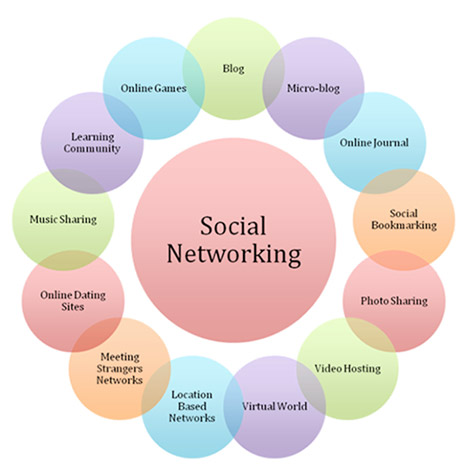 Social networking allows people to communicate, connect and share online with friends, family and other users. Social networks encompass a wide range of sites including blogs such as Twitter, video communities such as YouTube, the social networking site Facebook and virtual worlds such as World of Warcraft, Second Life and Minecraft. Young people often start their social media experience and online interaction in sites such as the online game world of Moshi Monsters or the virtual world of Club Penguin. These are generally safer places for young people to learn how to interact with other young people online. A site like Moshi Monsters is similar to Facebook but for kids. It operates under the same general principles as other social networks, you have a profile, you can connect with anyone and it is moderated by community volunteers.

Social networks and game sites for younger children include

Not only do social networking sites provide a place for people to connect with others, they are also a domain for young people to express their creativity. 38% of teen Internet users share their own creations online such as artwork, photos, stories or videos, and 21% reported taking information they found online, such as images or music and merging it with their own personal creation (Lenhart, Purcell et al. 2010). Popular social networks include:

A blog is a website made up of entries, also known as ‘posts’. Blog entries are typically made by an individual user and are often in the form of a commentary which is text based, but may include videos, graphics, and pictures. Blogs are commonly used as an online diary or to comment on areas of interest. The entries are displayed in reverse-chronological order. Popular blogs include:

Micro-blogging sites allow users to post short updates to be viewed by their listed friends or the public as defined by the user. The updates may be in the form of typed text, pictures, videos, photos, or links. The term "micro" is used to differentiate this form of blogging which uses a limited amount of text for each update compared to a blog, which may have an unlimited amount of space for a post. Micro-blogs function as a social networking site by allowing users to make posts and read the postings made by others. Popular micro-blogging sites include:

Online diary sites are similar to blogs. They allow users to share their daily experiences, as well as links, photos, clips and other information that inspires them or is related to their interests. In most of these sites you can follow users if you find their diary of particular interest. Examples of popular online journals include:

Social bookmarking sites allow users to add, edit, share and change web documents or bookmarks. These sites are different as they do not house the resource but merely the link to the resource. Users can organise bookmarks into categories. Education institutions are beginning to use bookmarking as an effective learning tool.

Photo sharing sites allow users to share images of interest to them with other users. Most sites allow for user profiles or interest groups to be developed. Likes, comments and tagging are popular features of most of these sites.

These social networks have been established to share with others your whereabouts. They are based on mobile versions of a website and allow you to show others where you are or invite others to join you. Sharing your location in an online environment may create risks for your personal safety.

Some social networks have been established for the primary purpose of introducing strangers to one another. Many of these sites operate through webcams. While all of these sites pose some risks for young people, Chatroulette is particularly dangerous as it operates through Google Maps. This means people can find out, via a Google map, where the person they are speaking to lives, or where they are communicating from. Other examples of stranger networks include:

Most of these sites are established for adults. Teachers should be aware that there have been instances in which students have found teachers on dating sites and have posed as like-age partners, engaging in relationship-based conversation with their teacher. Here are some of the more popular dating sites:

Some music sharing sites allow music to be purchased, while others breach copyright regulations and allow you to download music for free. If you use the second option, the download is logged in the history of your computer through your Internet provider and could result in prosecution.

Learning communities bring like-minded people together who may share similar interests to have meaningful peer-to-peer conversations or to share knowledge to achieve a learning outcome.

MMO (Massive Multiplayer Online) games are played online by many people simultaneously. In these games you play as a selected character of your choice, however this character does not represent you (it is not your avatar). Popular MMO’s include:

In a MMORPG (Massive Multiplayer Online Role Playing Game) users create an avatar who plays as the user. These games are played with multiple players simultaneously. Examples of popular MMORPG include: